Episode 032: How to Practice & Prioritize Self Care as a Creative Entrepreneur with Courtney Porter

Episode 033: 11 Time-Saving Gifts to Ask for This Christmas as a Creative Entrepreneur

On a gorgeous Saturday in May 2021, I was shooting Alex and Casey Hickner’s wedding. And, during their reception, I remember noticing Kate (one of Casey’s bridesmaids) having a really grand time with a tall guy on the dance floor. I also remember thinking to myself, “Those two are really freaking cute and clearly have a good time together wherever they go!”

I don’t think I knew Kate and Richard were engaged at the time, but luckily for me, Kate contacted me just a couple weeks later and asked if I was available to be her and Richard’s wedding photographer in June 2022.

The future Mr. and Mrs. Barrier are the kind of people who bring the party wherever they go, and I’m so excited to share their fall engagement photos at Strawtown Koteewi Park in Noblesville, Indiana on the blog!

Kate’s dad used to tell her, “You need to be with a guy like Richard.”

Now, before you check out Kate and Richard’s engagement photos, I can’t help sharing a bit about how they met and giving Kate’s dad major props.

You see, just a couple years ago, Kate’s dad was a regular at Bubba’s 33 in Greenwood, where Richard was the manager. Through conversations at the bar, watching games, and playing fantasy football, Kate’s dad and Richard became really good friends. In fact, they became such good friends that Kate started not only hearing about Richard but being told, “You need to be with a guy like Richard.”

Then, while being home from school, Kate needed to find a part-time job, and her dad knew that Richard was hiring. So, for a few months, Kate worked alongside the infamous Richard, and the two became friends.

Not wanting to put Kate in an uncomfortable situation and because Richard was her boss, Richard didn’t ask Kate out until (1) she’d finished working for the summer and (2) he had her dad’s blessing to ask his daughter on a date.

As it turns out, Kate’s dad was right about this match, and just a year later, Richard asked Kate’s dad another question. “May I ask Kate to marry me?”

Richard proposed on the beach on Kate’s birthday.

Now, while Kate and Richard had talked about marriage and Kate had given Richard a few ring pointers, they hadn’t looked at rings. As a result, Kate didn’t think a proposal was in the super-near future. However, Richard had other plans!

In December 2020, Kate and Richard went on vacation with Alex and Casey during Kate’s birthday. On Kate’s birthday, the group had plans later in the evening, but Richard asked Kate if he could take her to get a drink beforehand so they could do a little celebrating solo.

Kate wasn’t the least bit suspicious; however, she was confused when Richard (who is typically very go with the flow) insisted that they go to a specific restaurant even though Kate had another restaurant in mind. But, Kate shrugged it off and was happy to have a little one-on-one time with Richard and then take a walk by the water.

During their walk along the beach, Richard said, “That shell looks cool.” Then, when Kate thought Richard was going to show her a shell, Richard got down on one knee and asked Kate to be his wife. In the meantime, the photographer Richard had hired (hence the reason restaurant plans couldn’t change) captured the special moment. Way to go, Richard!

And, I can now attest that seeing Kate and Richard having a good time on the dance floor was the smallest glimpse into how much fun these two really have together. I mean, despite having to break up their engagement session into two shoots due to rain that rolled in much faster than we anticipated, Kate and Richard were simply thrilled to get to enjoy the engagement photo milestone and spend time together.

Needless to say, I loved every second of hanging out with Kate and Richard and cannot wait for their wedding day!

Kate and Richard, I can’t begin to explain how much fun it is to just be around you guys or how honored I am that you’re trusting me to be your wedding photographer.

I hope you love these previews from your fall engagement photos at Strawtown Koteewi Park, and I will be counting the days until your rooftop wedding in downtown Indianapolis! 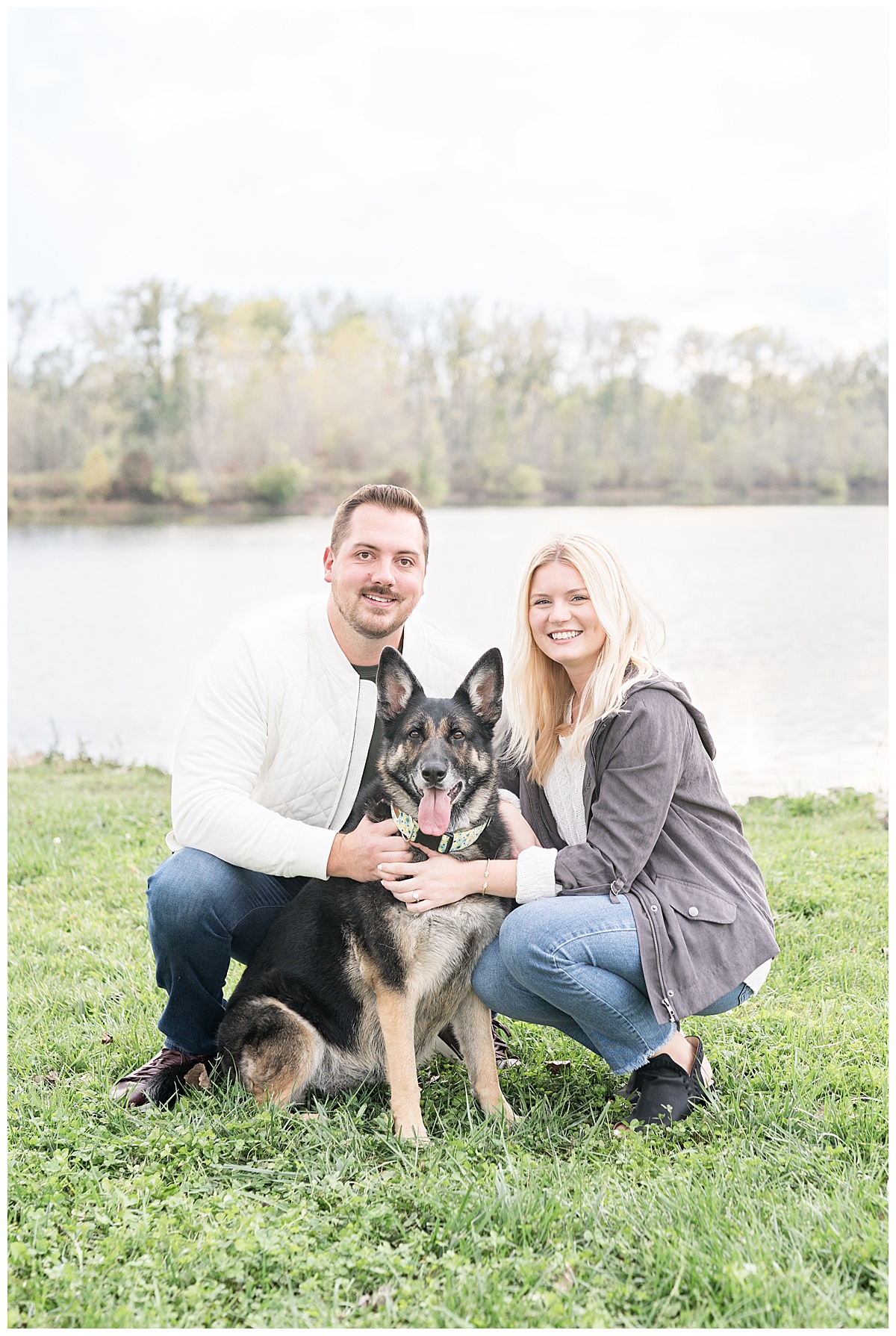 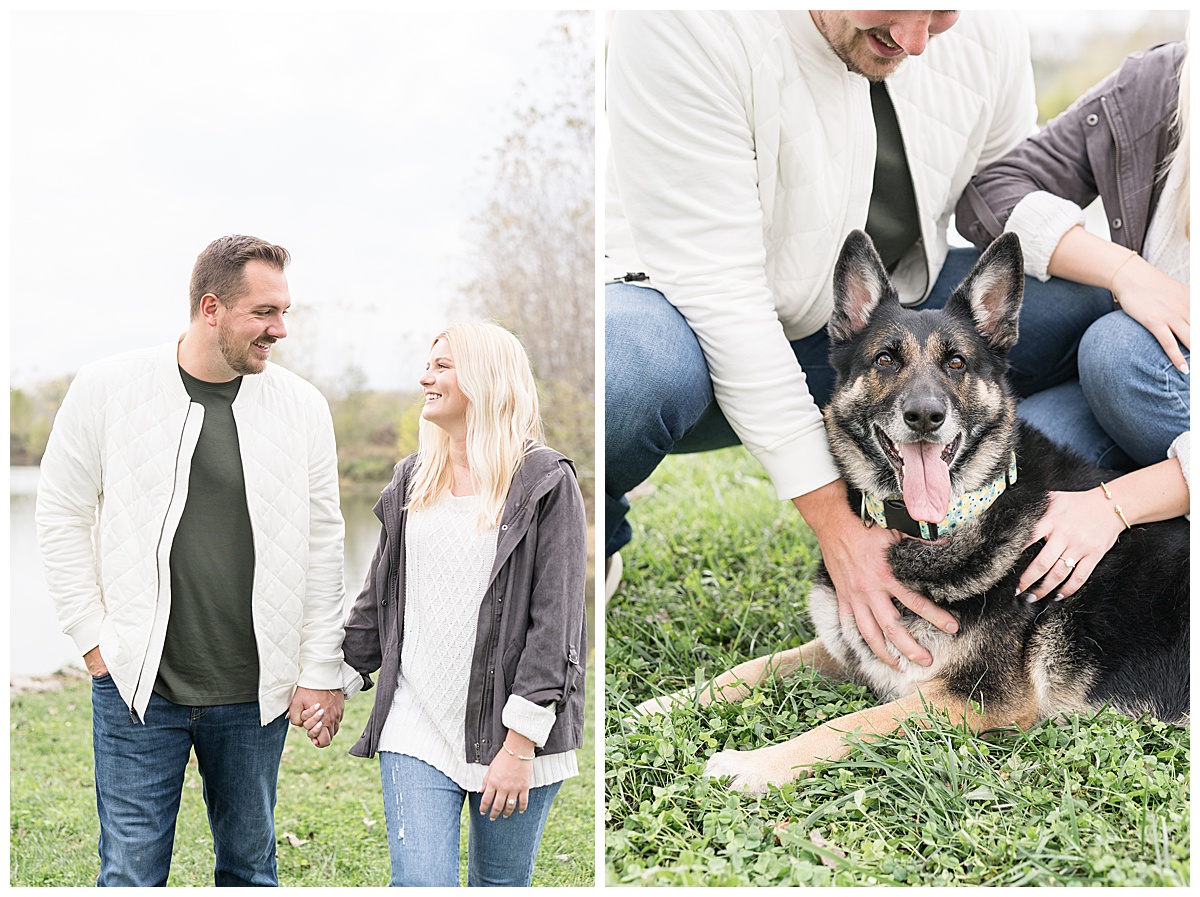 Cruz was such a good girl during this shoot. I may or may not have taken a video of her super-cute head tilt and watch it semi-regularly! 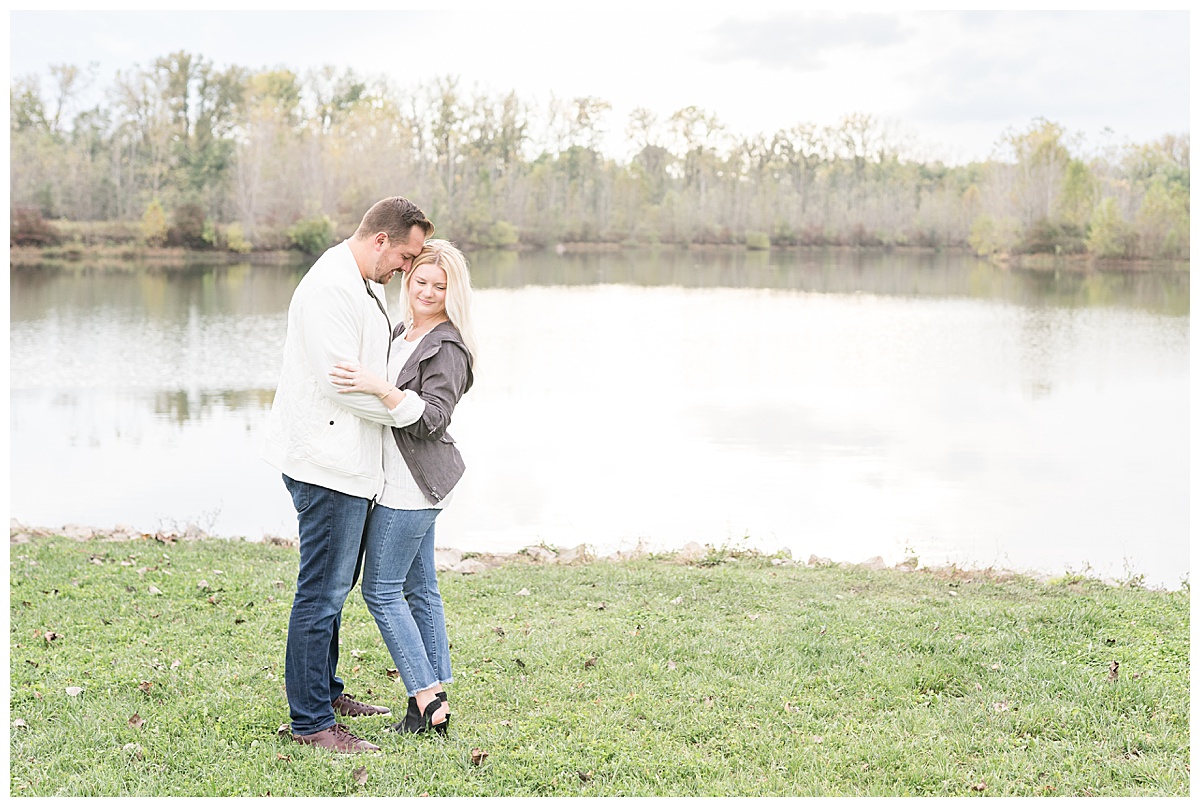 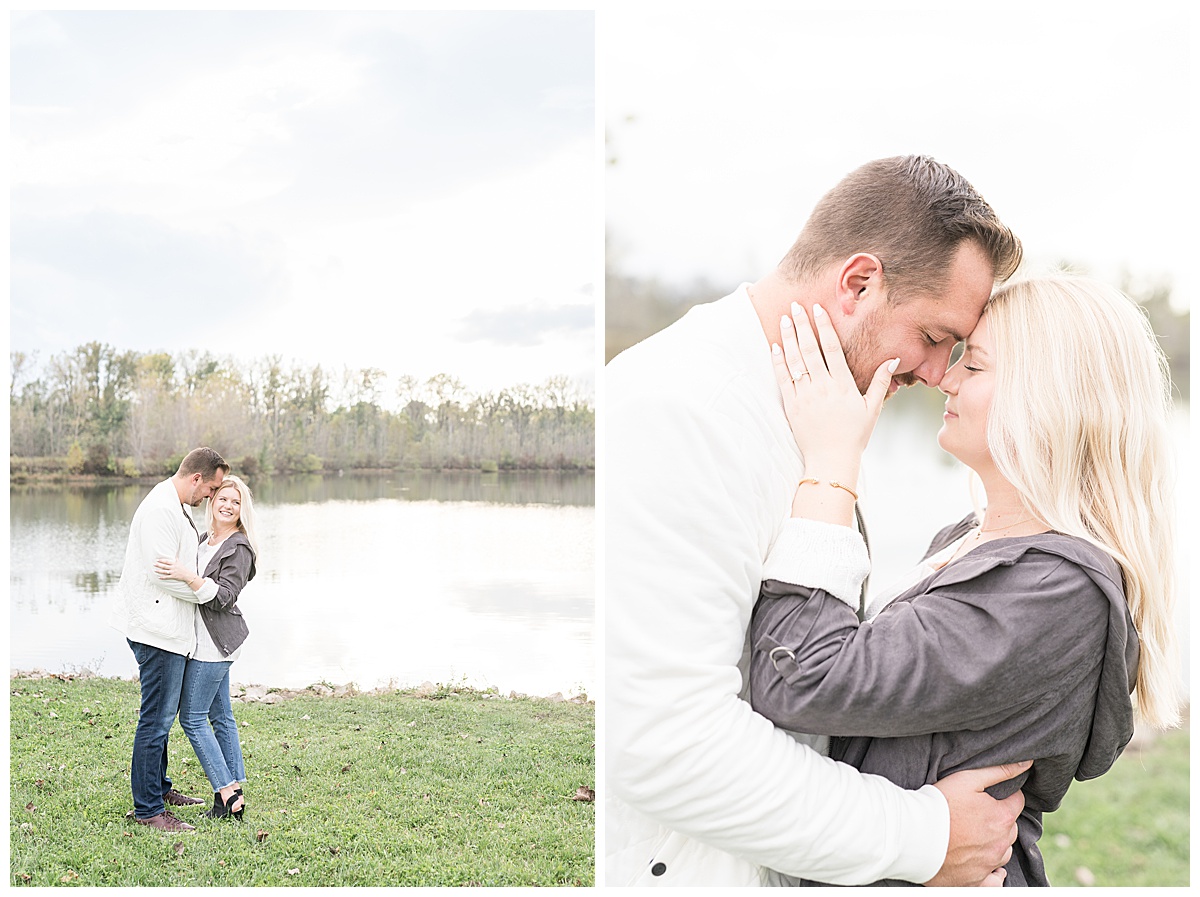 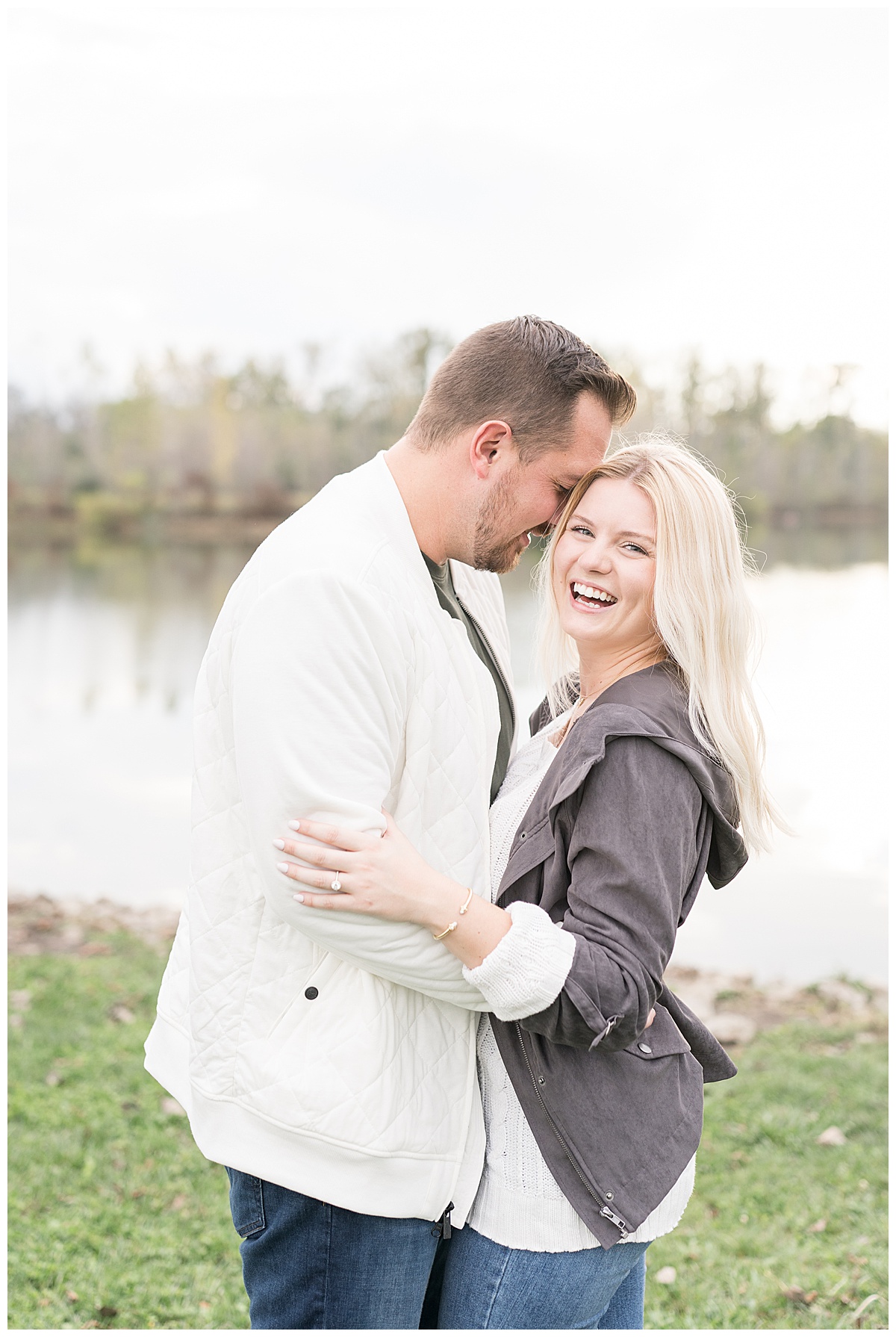 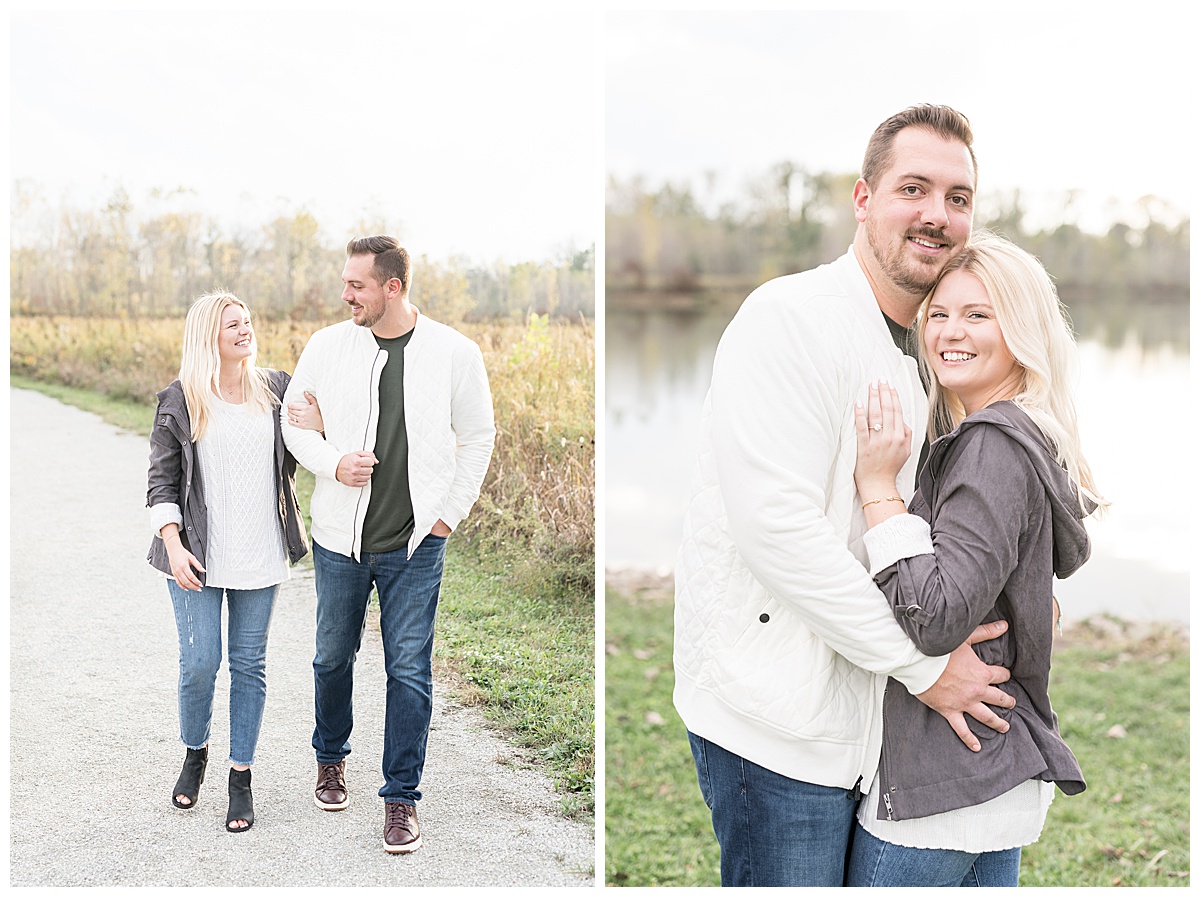 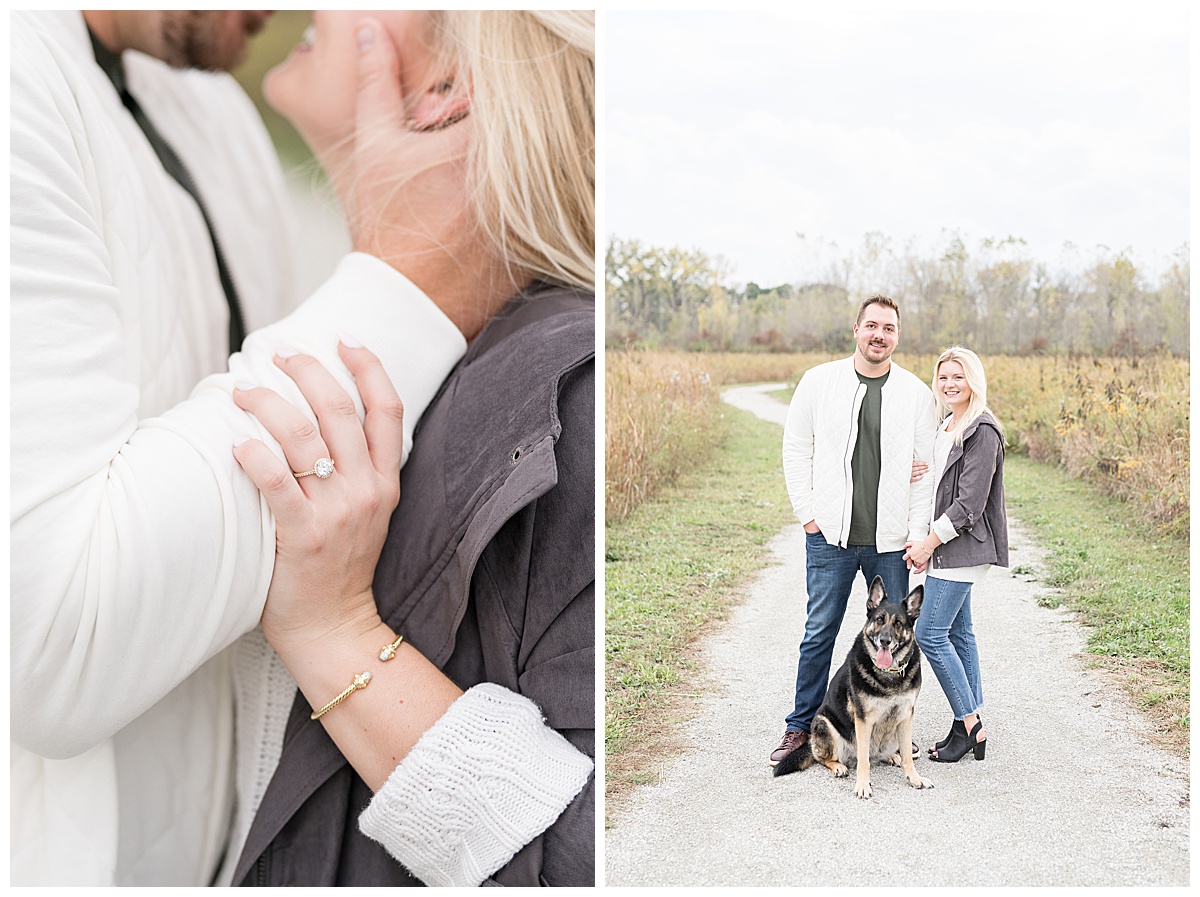 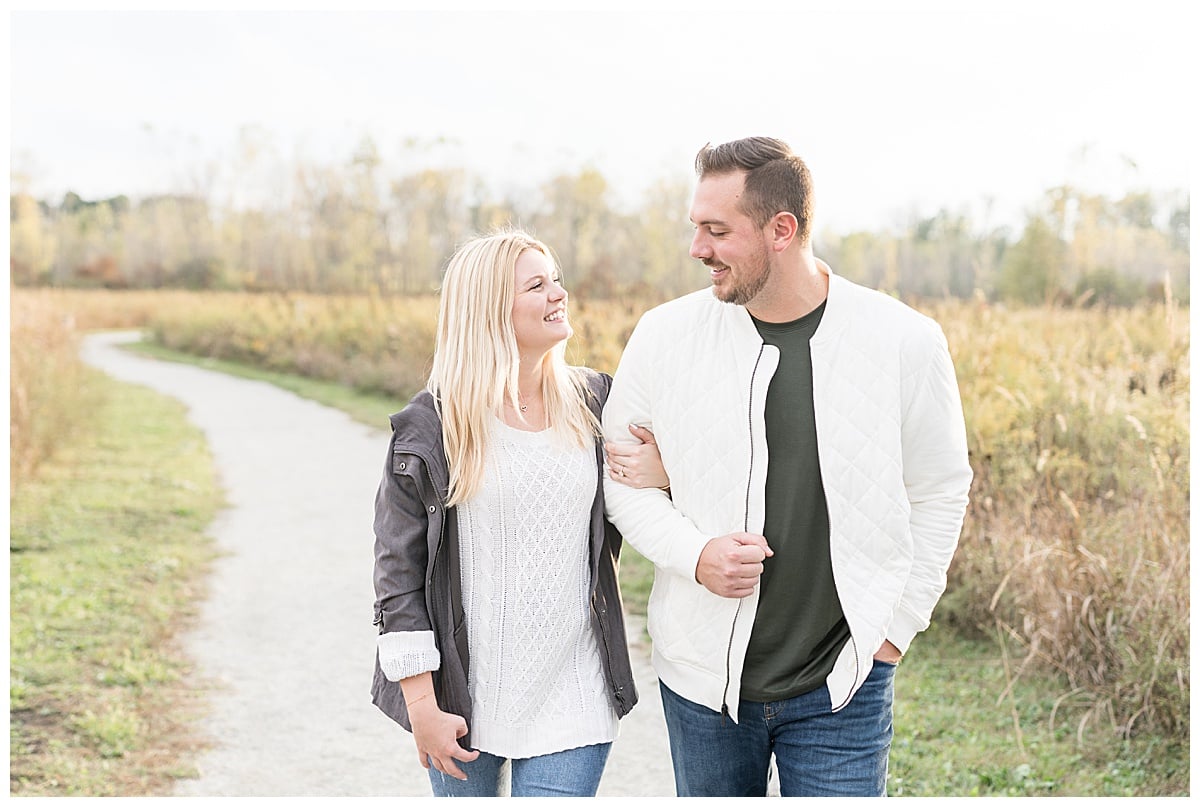 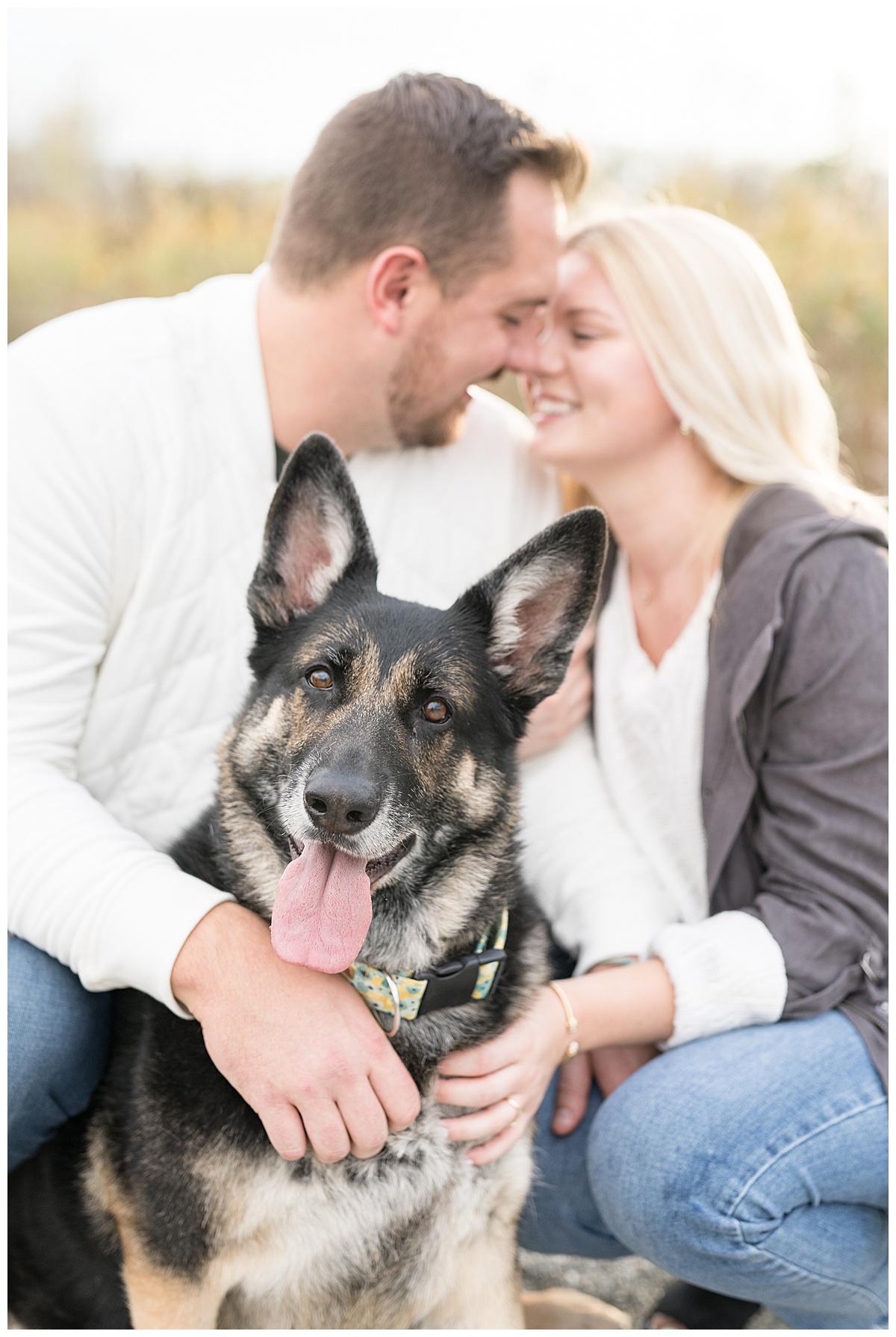 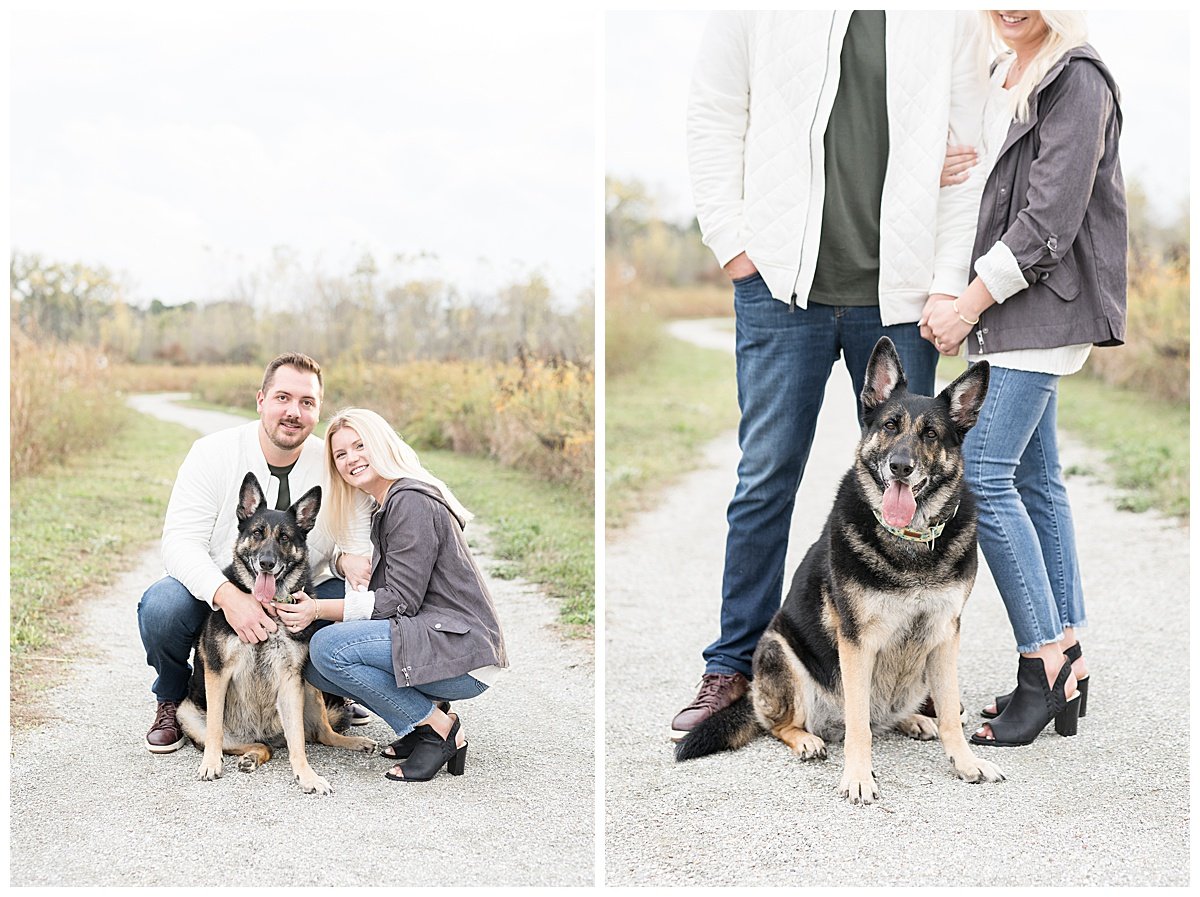 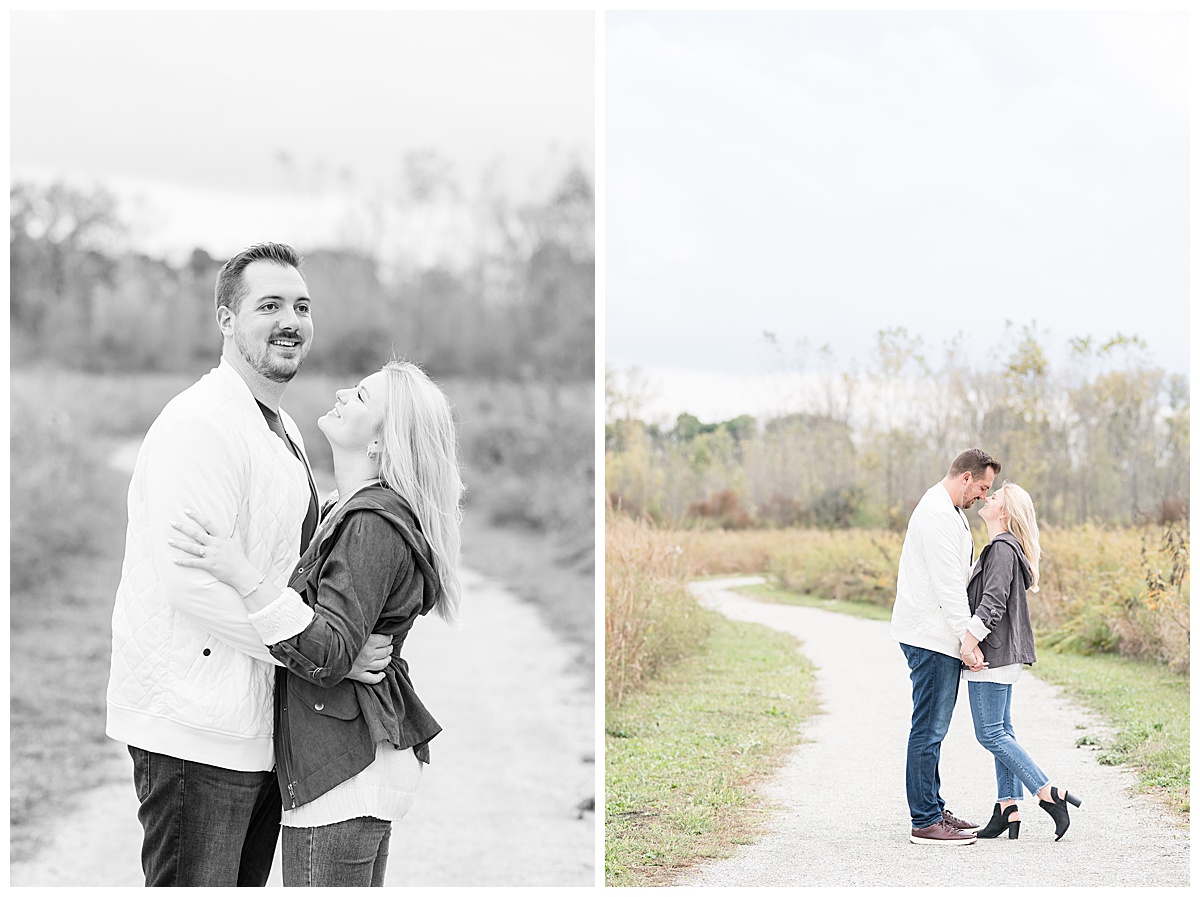 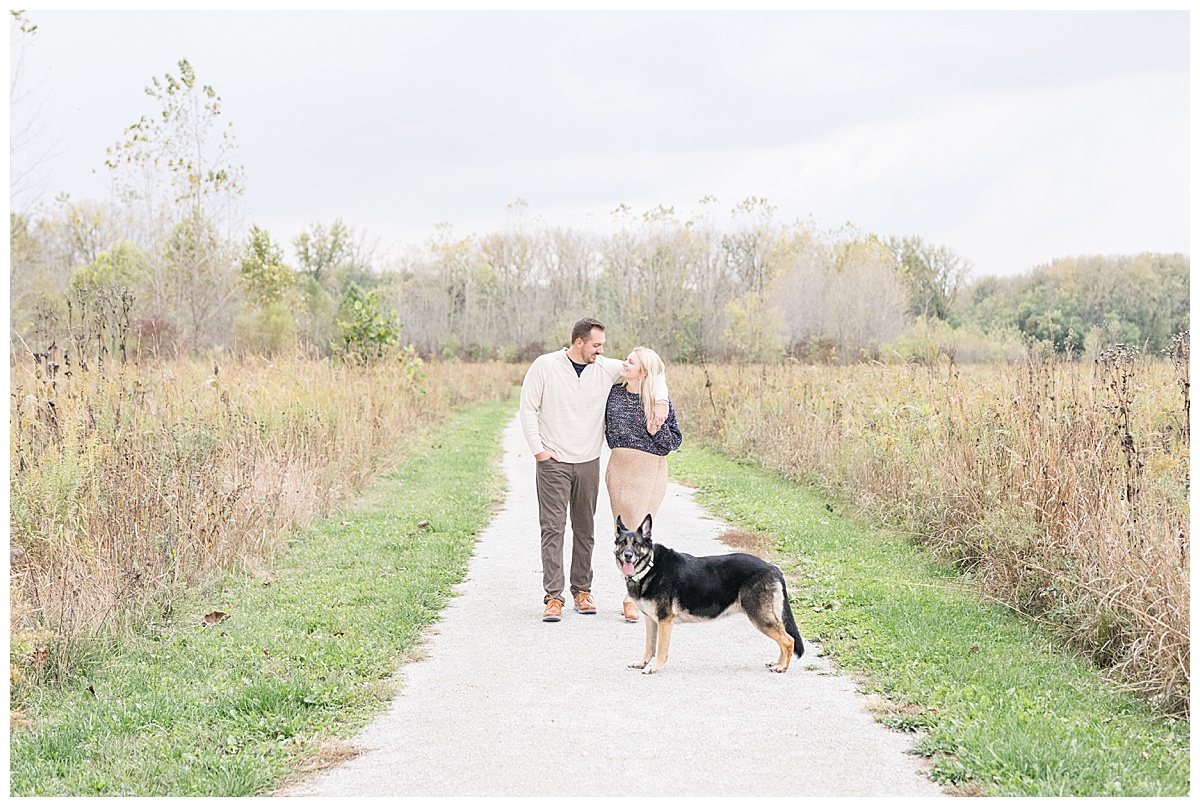 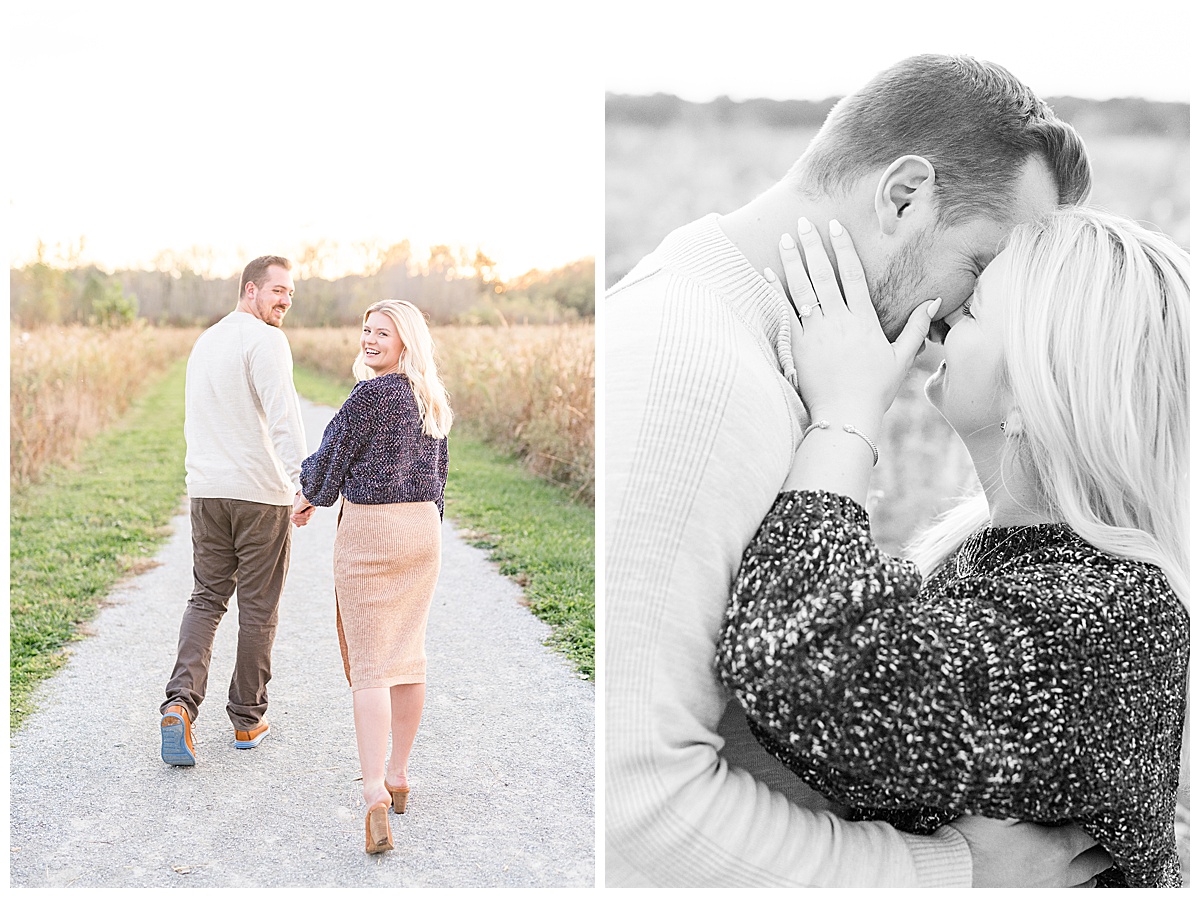 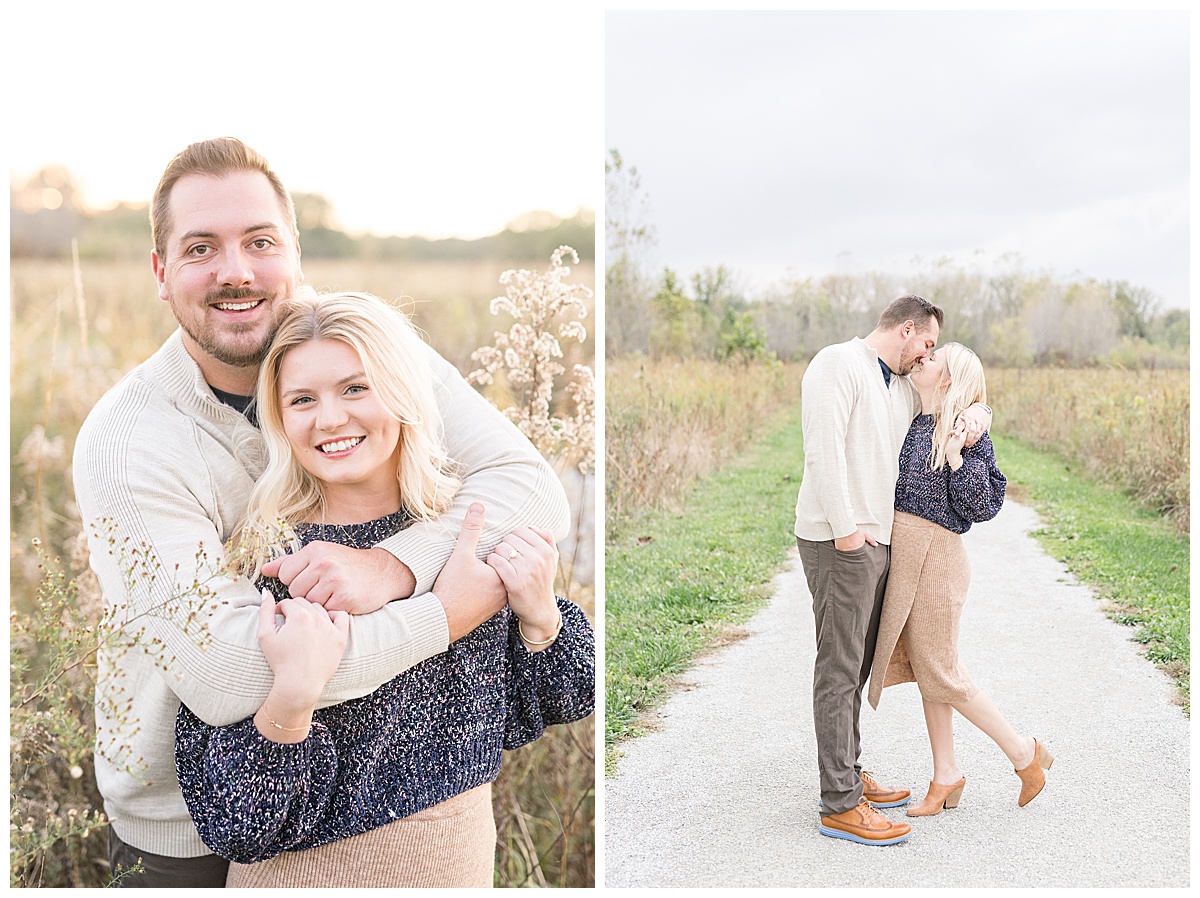 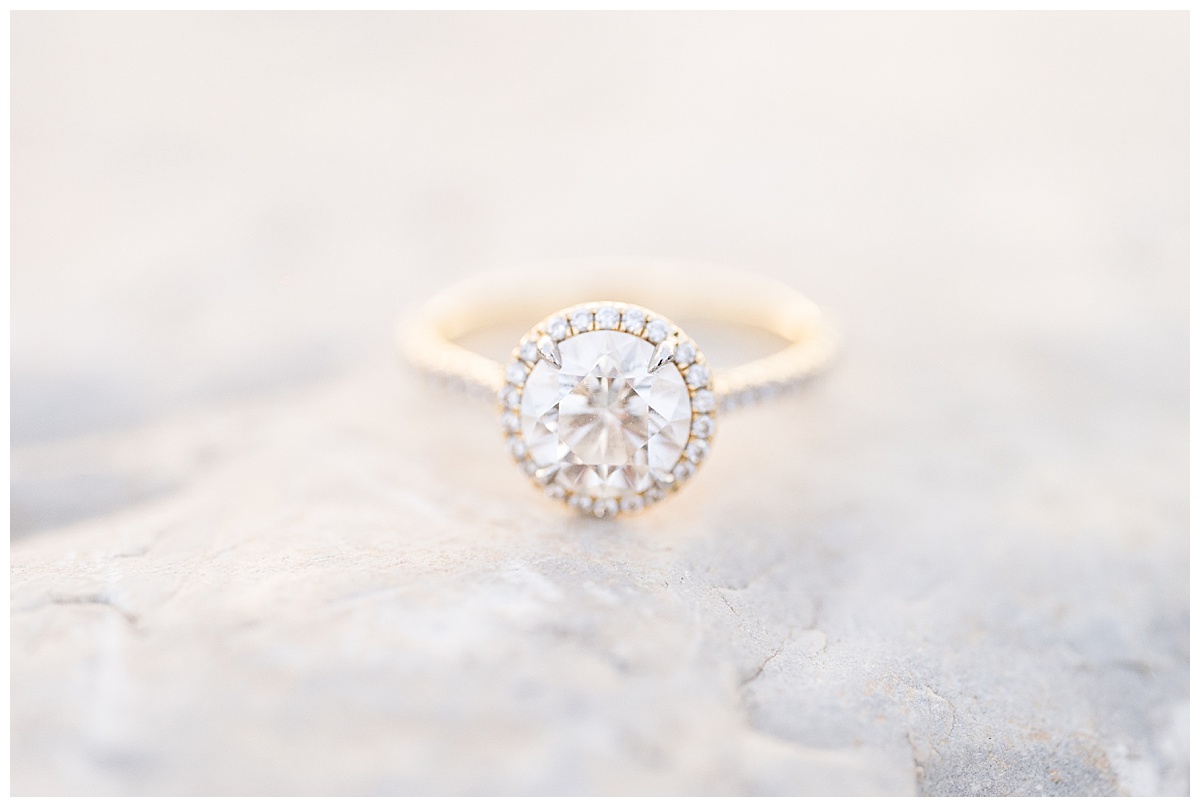 Fun Fact: Richard ordered Kate’s ring, and it was on its way. THEN, Kate and Richard started talking about rings, looking at photos, and discussing what Kate did and didn’t like. Nonchalantly, Richard showed Kate a photo of the ordered ring, and Kate said, “That’s perfect!” 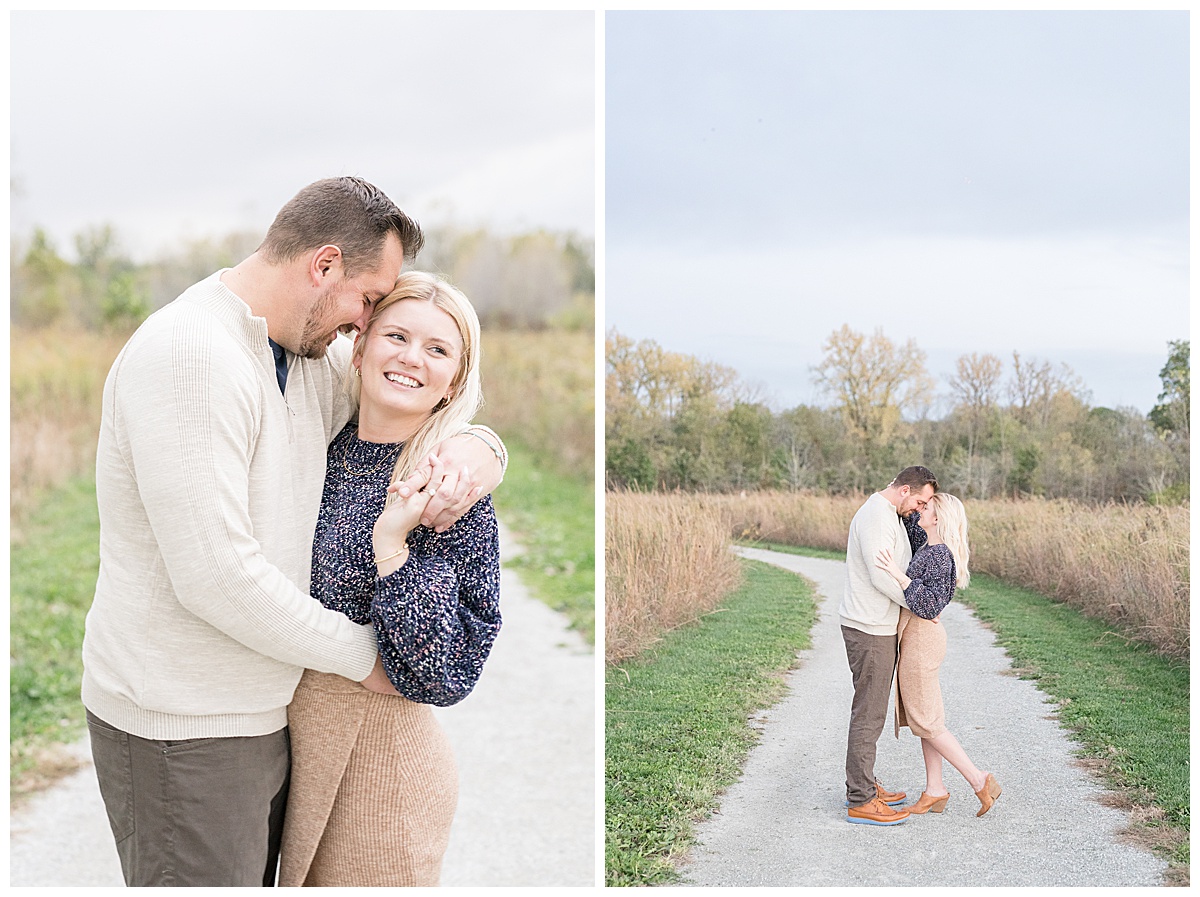 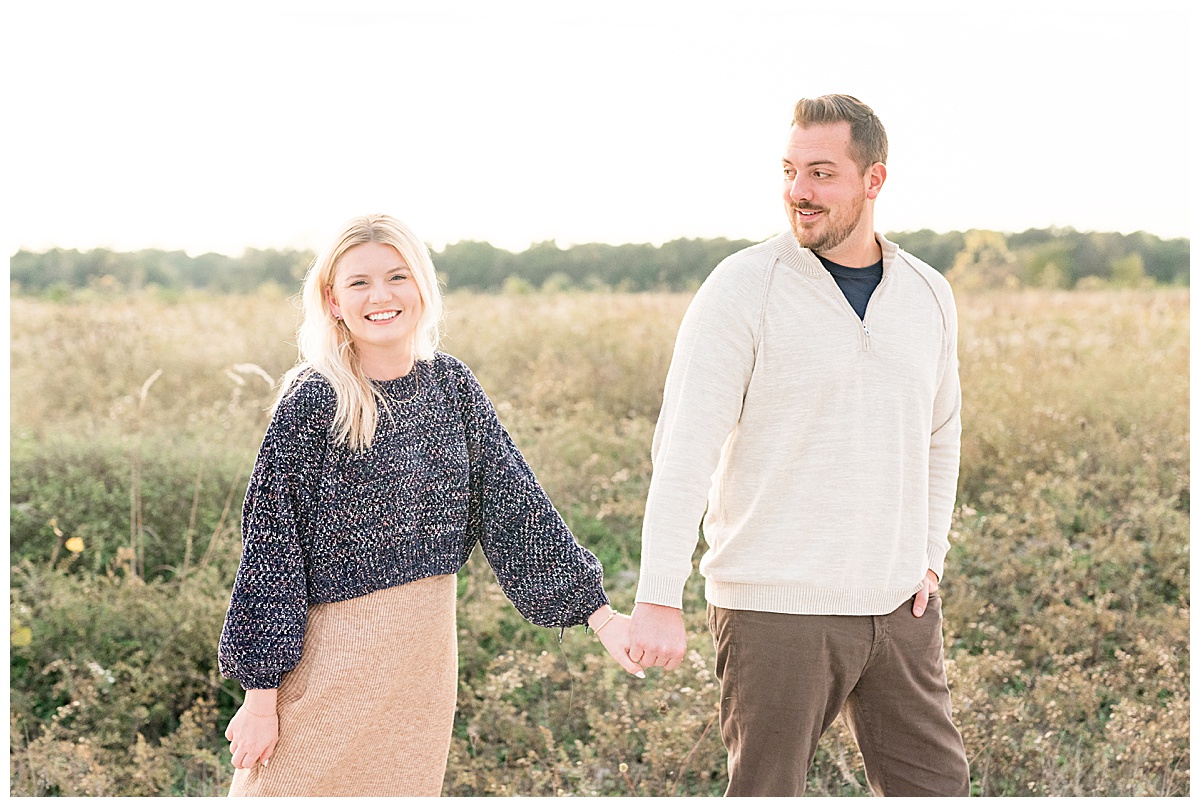 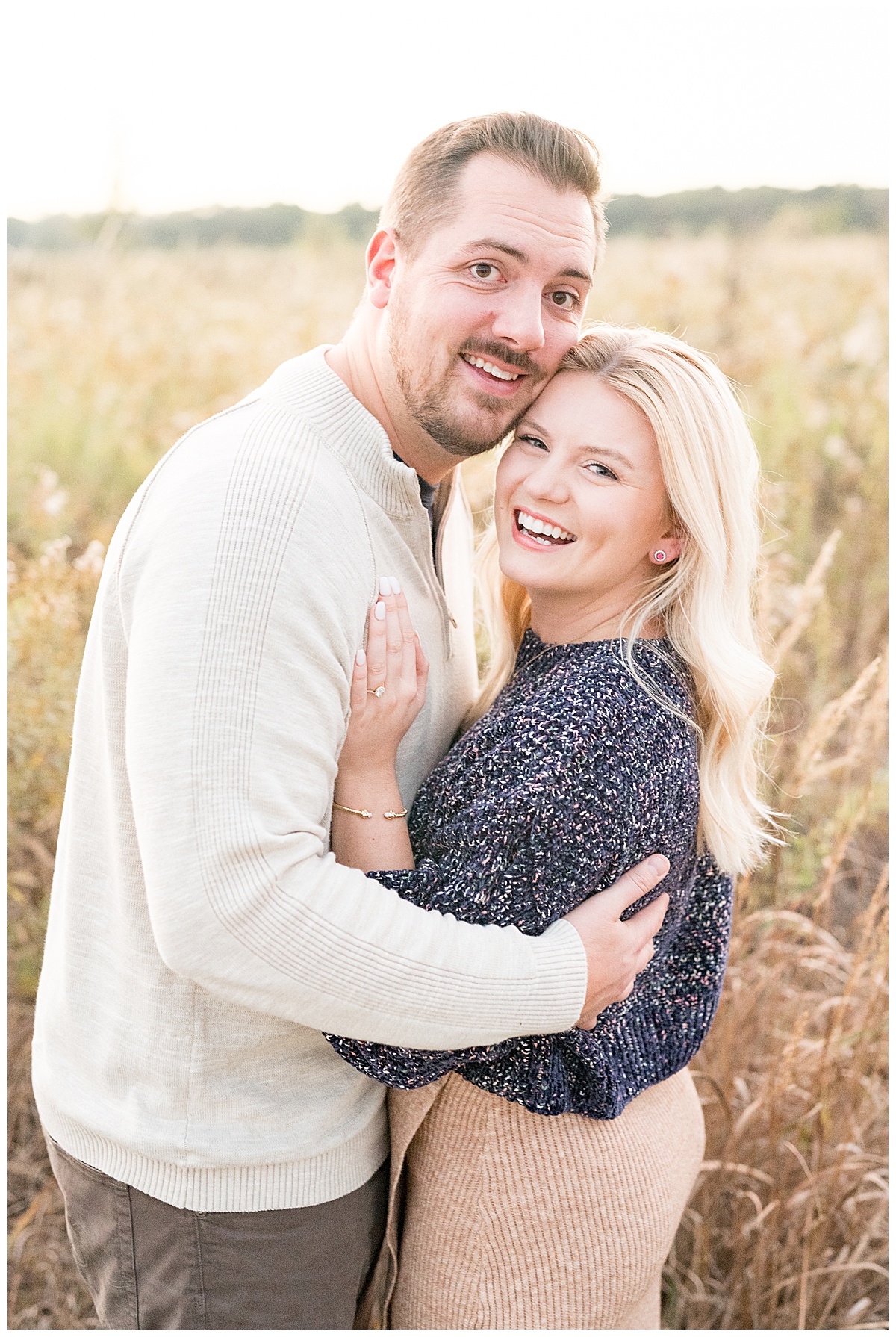 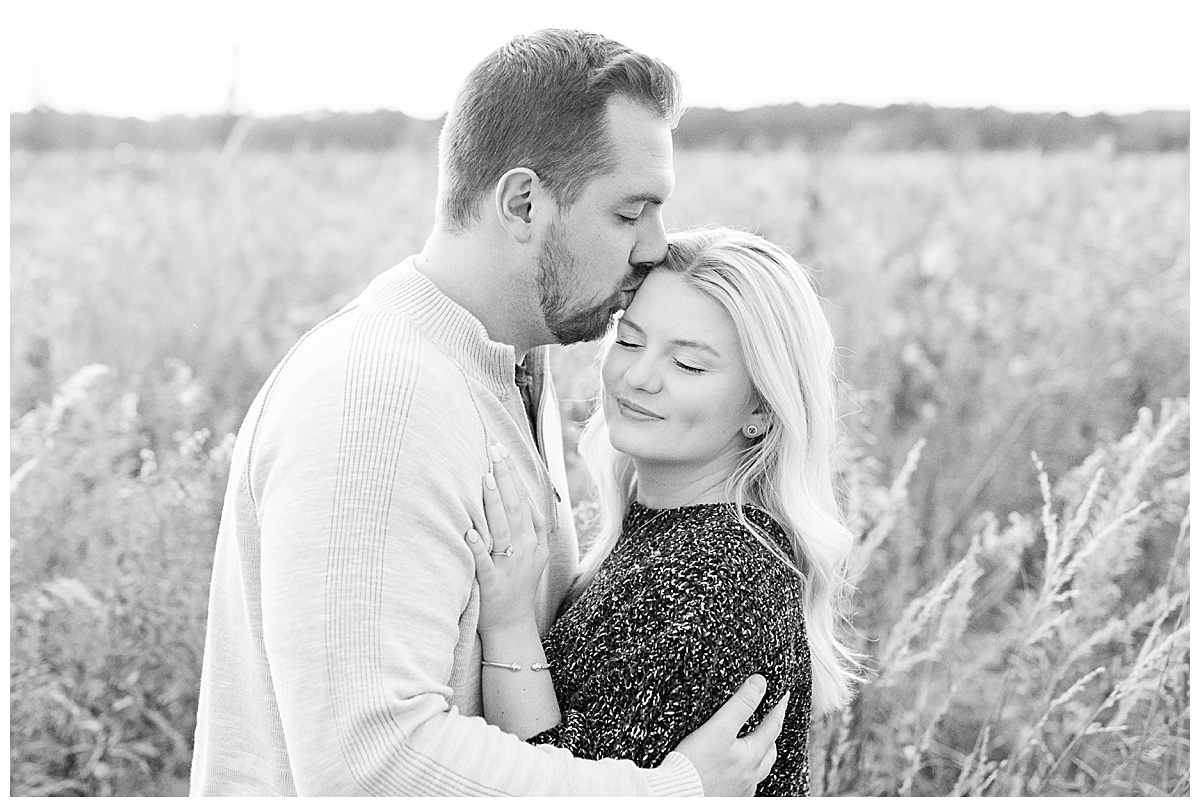 If you’re wondering where the sun came from, we ended up having to split Kate and Richard’s shoot into two sessions. During part one, we thought we were going to beat the rain, but it came in fast. Kate and Richard, thank you for being flexible. I loved getting to photograph you guys TWICE! 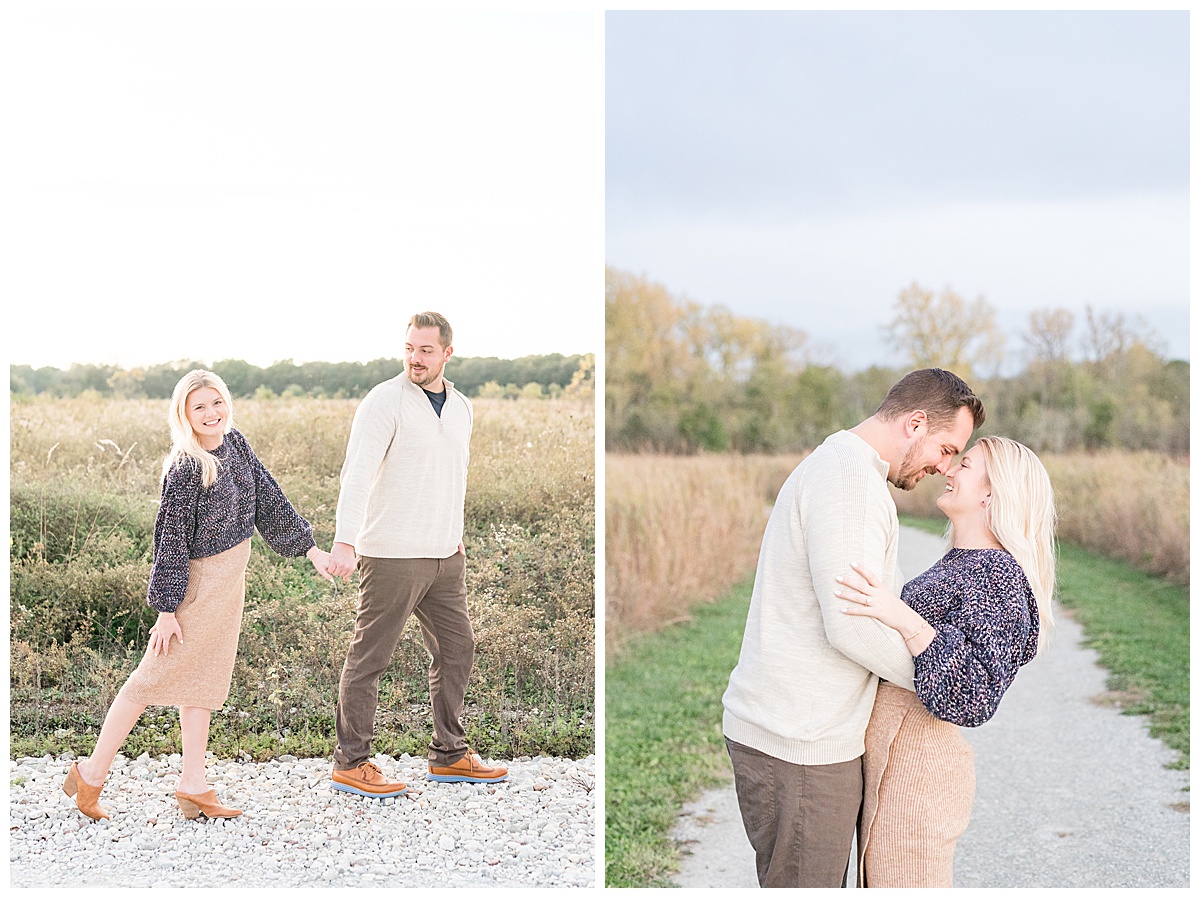 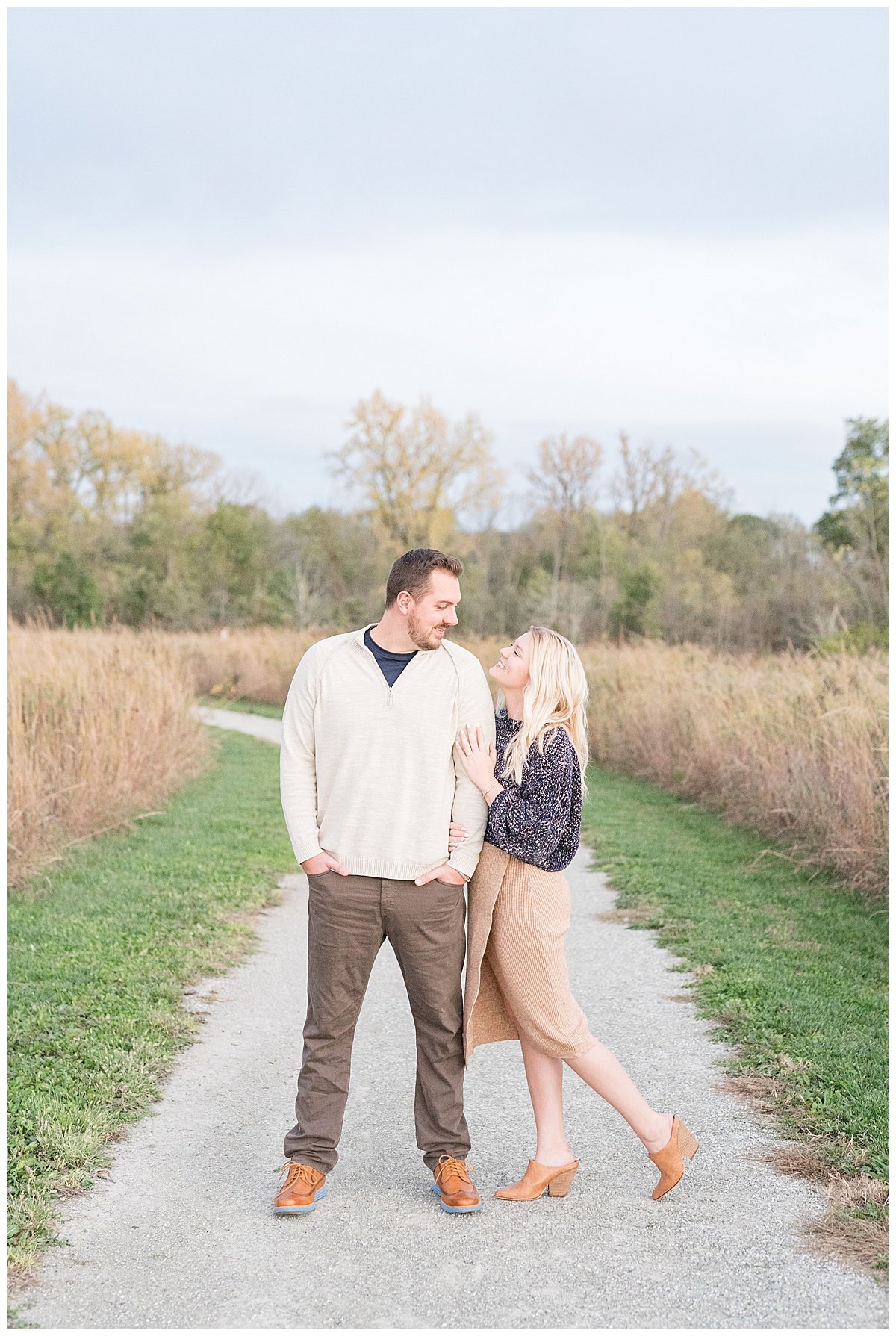 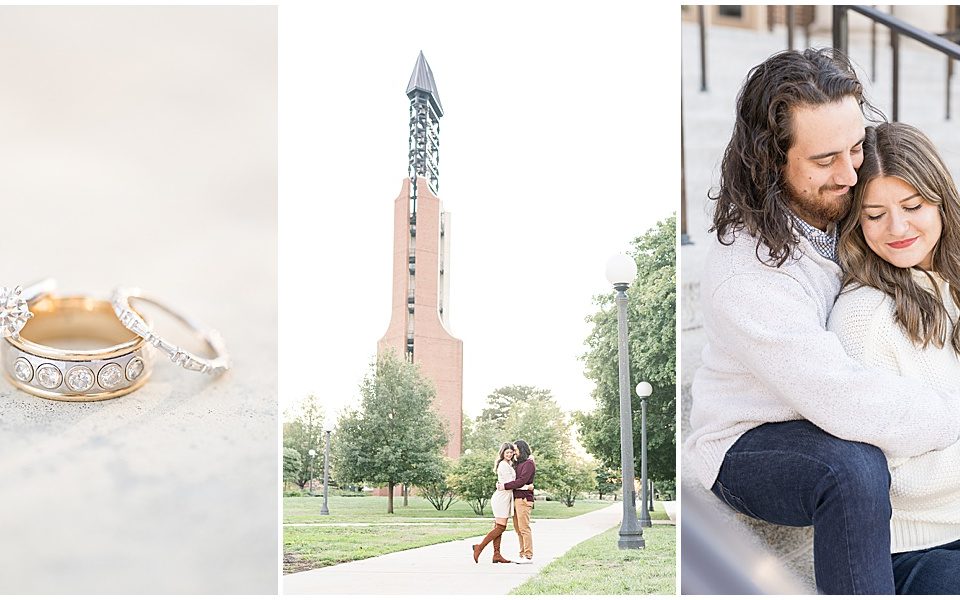 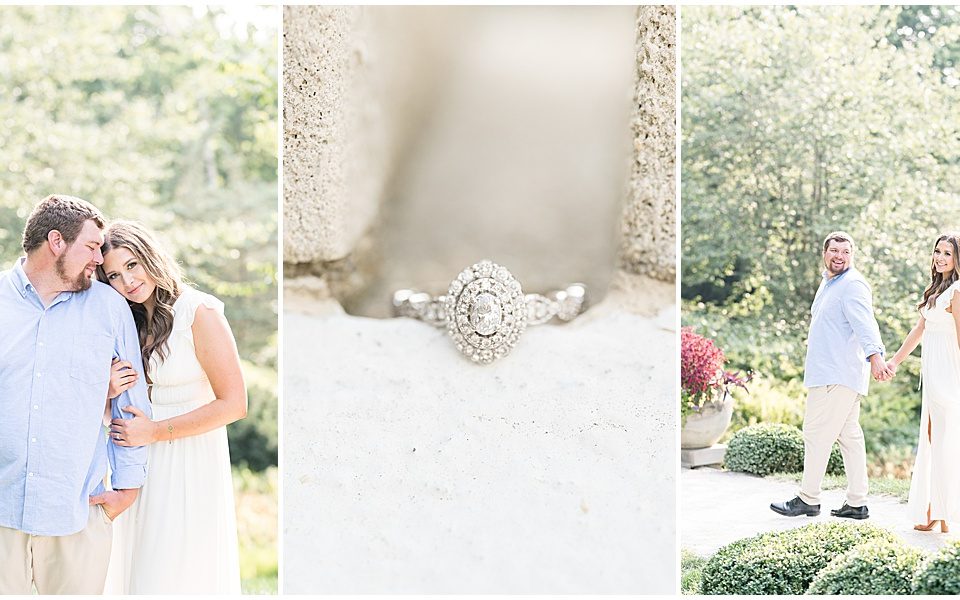 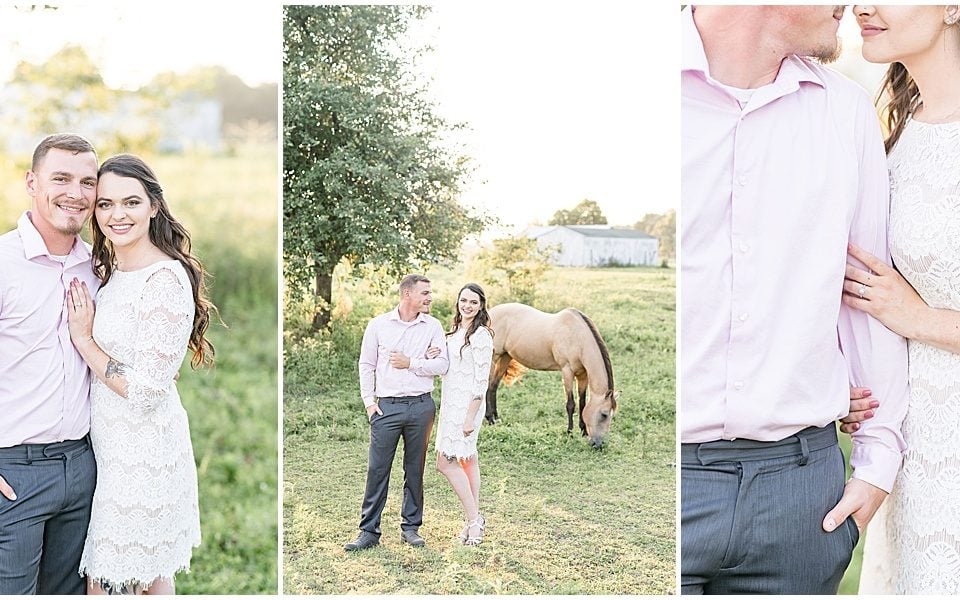 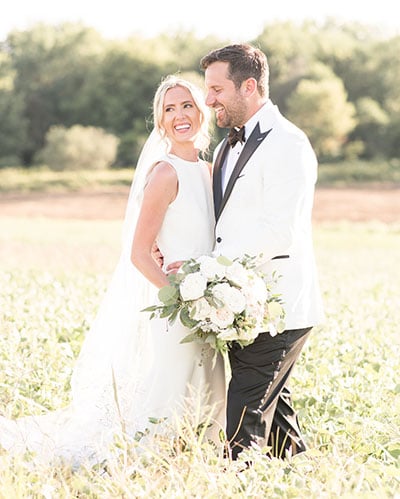 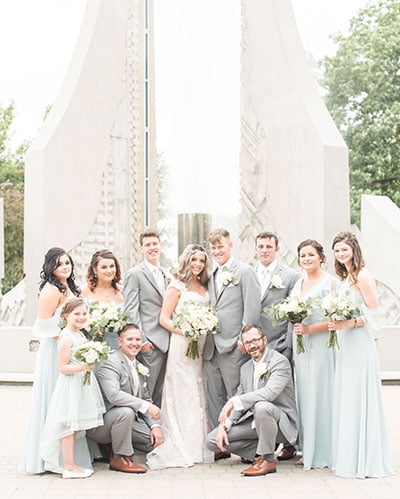